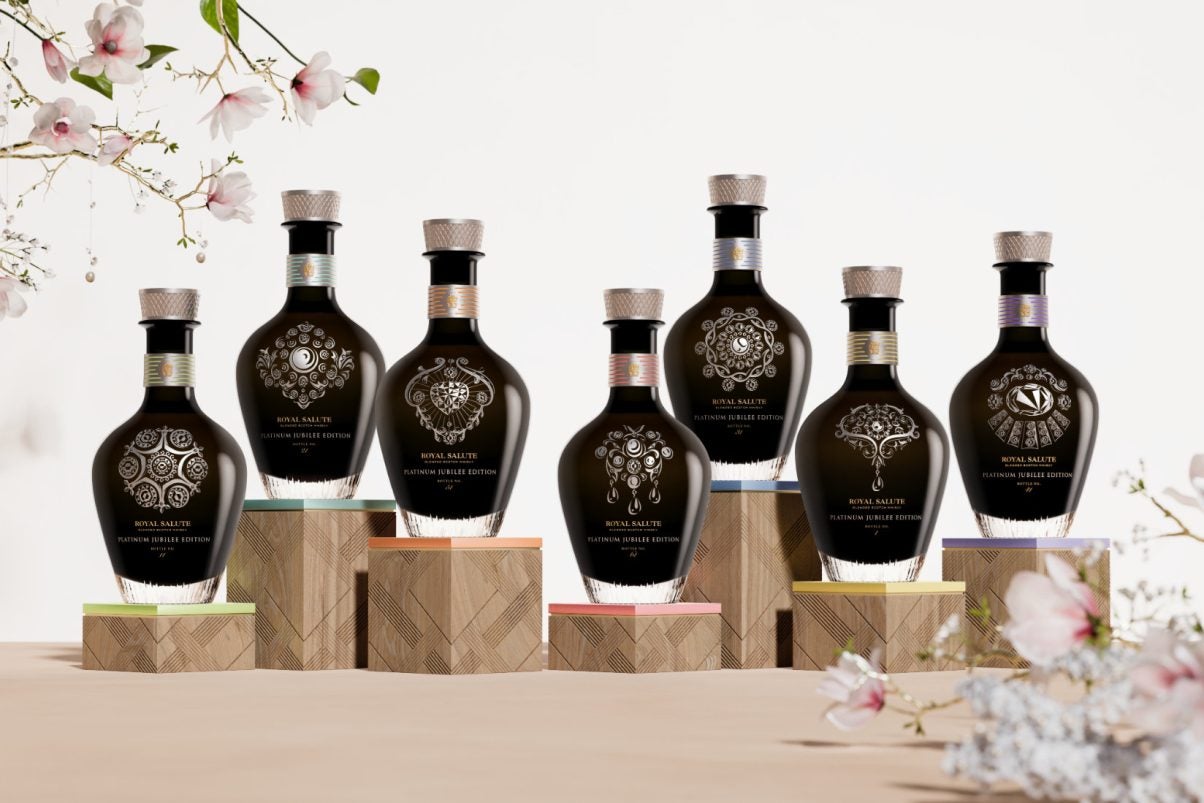 Royal Salute, the master of exceptionally aged Scotch whisky, has unveiled an ultra-prestige limited edition expression to celebrate the Platinum Jubilee of Her Majesty Queen Elizabeth II. The Royal Salute Platinum Jubilee Edition, launched in the Jubilee year of her reign, pays homage to Royal Salute’s unique and regal heritage that has been a source of inspiration for all expressions since the first flagons of Royal Salute were created in 1953 as a gift to Her Majesty Queen Elizabeth II on her Coronation Day.

Curated with special significance and symbolism, The Royal Salute Platinum Jubilee Edition blends traditionalism with modernity, seeking to spark enchantment and wonder, and provides an opportunity for those who try it, to share their majesty with the world. Inspired by Her Majesty Queen Elizabeth II’s hidden language of costume, the bottle design celebrates her vibrant and joyous style and her use of brooches to show thoughtfulness, empathy and commemoration. To honour the Queen’s seven decades of reign, Royal Salute chose seven of her iconic brooches, the designs of which have been engraved on seven different decanters and box designs, with a colour palate reflective of Her Majesty Queen Elizabeth II’s famous wardrobe.

The expression is a bespoke and intricately layered blend, which is finished for over two years in Tawny Port casks – a wine served during a Coronation Banquet in 1953 – and includes some exceptionally high-aged whiskies from no fewer than seven silent stills, each now lost to time. While their reputation lives on, the rarity of the remaining whisky means this unique expression, with red apple notes of the Inverleven Distillery, the blackcurrant vibrancy of Lochside and rich toffee of Caperdonich, can never be repeated. The result is a perfectly balanced whisky with a distinctive flavour profile that has developed over decades and was perfected thanks to the intricate nurturing and expert craft of Royal Salute Master Blender Sandy Hyslop.

Echoing the skill and artistry captured within the inimitable blend, each of the individually numbered 147 collectable decanters has been crafted from hand-blown Dartington crystal, making it as unique to its owner as the whisky inside. The box which houses the precious decanter features seven embossed lines which represent the seven decades of Her Majesty Queen Elizabeth II’s reign.

“To mark such a momentous occasion, I wanted to create a blend that captured Royal Salute’s unique heritage, while honouring Her Majesty Queen Elizabeth II’s seven decades of reign. We have achieved this by using incredibly rare whisky from no fewer than seven stills to represent the seven decades of the Platinum Jubilee. It is an honour to have had a role to play in this piece of history; a task that has allowed us to release a prestigious whisky that also acts as a precious collector’s item for whisky lovers to cherish.”

A total of just 147 decanters of the Royal Salute Platinum Jubilee Edition were released in June 2022 and are now available for purchase at selected specialist retailers for RRP $20,000 USD. For more information, visit royalsalute.com or follow @royalsalute on social media.