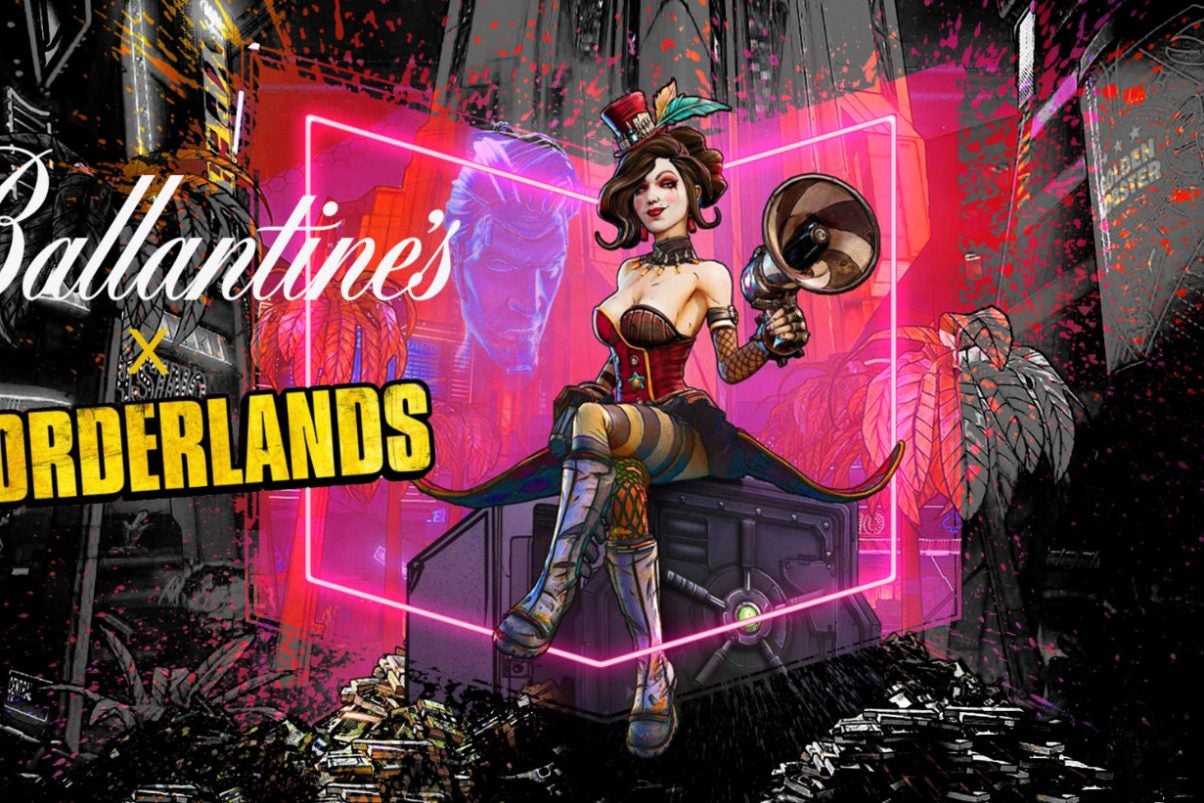 Moxxi, who features as a bar owner in the game’s setting, Pandora, and gives in-game missions to players, will release her very own limited-edition bottle of Scotch whisky as part of the launch and her new role. The Ballantine’s x Moxxi’s Bar Edition will feature the familiar, renowned taste of Ballantine’s Finest and will be available first on Pandora and later across selected retailers on Earth. Moxxi will also be sharing her spoils with her close friends and fans through her social channels, LinkedIn and Twitter. Those lucky enough to snag a bottle will get access to exclusive Borderlands The Game 3 content.

Moxxi’s role as CGEO will see her bring together existing Vault Hunters and new looters across the galaxy, serving up a series of missions. As well as launching her very own limited-edition loot, she’ll be laying down some new ground rules in Moxxi’s Bar and will be promoting responsible drinking via a special, personalised, cameo-filled message, encouraging visitors to her bar and beyond to drink and play responsibly.

In the coming months, as part of her role, the character will also recruit a team of Borderlands The Game fans, who will be creating content, giving out exclusive swag and sharing Moxxi’s latest scoops to help build brand awareness and bring the partnership to life. There’s also whispers of Moxxi making appearances at bars beyond her usual turf…

“Our partnership with Borderlands The Game is an exciting first step into the world of gaming and is part of our ambition to open up the Scotch whisky category to new fans and reach new audiences. Borderlands The Game is one of the most loved gaming franchises of all time and its opportunity for endless customisation epitomises Ballantine’s ethos of encouraging people to live life the way they want; because when they do, there’s no wrong way. We’re delighted to have Moxxi on board and I have no doubt she will help catapult Ballantine’s to galactic heights and encourage Vault Hunters to stay true to themselves.”

“A good partnership balances business and pleasure in equal measure,” says Moxxi. “And ours got off to a sweet start. George Ballantine came over to my place with a blush-worthy proposition. He offered me my own special run of bottles. I call it, ‘Moxxi’s Bar Edition.’ Get your hands on one of them, sugar, they’ll treat you right. Like the best things in life, it goes down smooth.”

Ballantine’s believes that everyone is unique, an original, a one-off and worth celebrating. As a brand it encourages people to free themselves from societal expectations and live life the way they want; because when they do, there’s no wrong way to live. People come to the virtual world of gaming to do what they want and be who they want to be, allowing them to transcend reality, free from judgement. Borderlands The Game creates an inclusive world, allowing players to connect and identify with characters, through their unique personalities, stories and sense of style.

Moxxi’s appointment is the first step in a long-term partnership between Ballantine’s and the Borderlands The Game franchise, with more to be announced during 2022. Find out more at Moxxi’s channels as well as on www.ballantines.com

Stay up to date with Moxxi’s activities and find out how to get your hands on a bottle by connecting with her on LinkedIn and Twitter.

Find out how Moxxi recommends enjoying a Ballantine’s at Moxxi’s Bar and at home with her Borderlands The Game inspired serves including Moxxi’s Mule and Apocalyptic Spritz here.